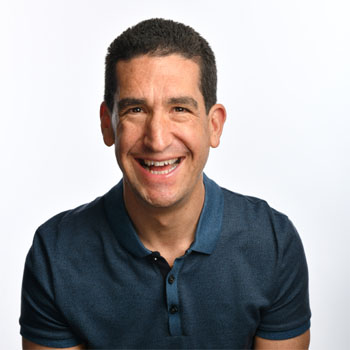 Darren Altman is a voiceover artist and impressionist, who narrowly missed out on a place in the final of Britain’s Got Talent 2016, coming 4th in his semi final doing celebrity impressions. At the end of his audition, Darren received incredible comments from all four judges, who simultaneously rose to their feet and gave him a standing ovation. Their praise was unanimous.

He has recorded at Abbey Road Studios, drummed for West End shows, played at Ronnie Scott's jazz club, drummed for the Queen’s Golden Jubilee Concert, working with Ladysmith Black Mambazo and Sir George Martin, the Pop Idol Big Band with Will Young and has toured the world with jazz and pop groups.

His musical ear and attention to detail has led Darren to deconstruct voices and give his audience a hilarious master class in how to do celebrity voices.

Darren has impressions have been heard on BBC Radio 4, The World This Weekend and BBC Radio 1 promos and he appeared as Fred Flintstone for Strictly Come Dancing!

Since his appearance on Britain's Got Talent Darren has been asked to present corporate and training videos, incorporating many of his celebrity impressions. Recently done brilliantly on TikTok, amassing over 1.5m likes!

Darren is busy performing his standup material in comedy clubs around the countryand can be heard presenting shows on Radio Jackie, across SW London andSurrey

He enjoys hosting events and award ceremonies and has worked alongsideClaudia Winkleman, Joel Dommett, Tess Daly, Pat Sharp, Rory Bremner and GBOlympic swimmer Mark Foster in his role as the “voice of God” for awardceremonies.

“Of all the years we’ve had impressionists on this show, I genuinely think this is thebest and most original act we’ve had. Absolutely hilarious Darren, a million percentyes!” - Simon Cowell

“Very simple; brilliantly funny from start to finish. Every impression was spot on. Itwas a faultless audition; I’m very excited about you.” - Alesha Dixon

“What I loved about this act was that it was really intelligent and different. I lovedthe way each voice morphed into the next.” - Amanda Holden

“It was brilliantly funny from start to finish and a lot of those impressions I’ve neverheard people do before. I’m excited about what you’re going to do next.” - DavidWalliam