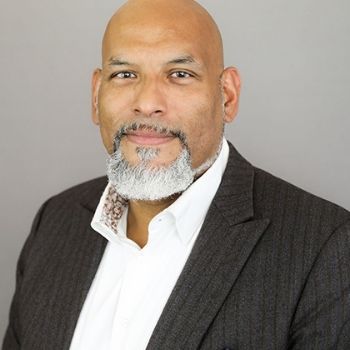 John Amaechi OBE is an organisational psychologist, Chartered Scientist, New York Times best-selling author, CEO of leadership consultancy APS, and was the first Brit to play in the NBA.
John partners with organisations to help identify and implement ways to increase productivity by improving communication & leadership skills, organisational culture and climate – often where mainstream options have failed.
Born in Boston, USA and was raised in Stockport, Cheshire, attending Stockport Grammar School. He moved back to the United States to play high school basketball in Toledo, Ohio... He went to a ‘starting five’ position on the Cleveland Cavaliers (NBA) in just six years.
John was the first former NBA player to come out publicly which he did in his autobiography Man in the Middle.
Since retiring from NBA basketball, he regularly commentates for CNN, MSNBC, CBC and the BBC.  He has also appeared on a shows like BBC Breakfast, The Daily Show, Real Time with Bill Maher, Oprah and many more. Topics have included the impact of depression, interpersonal skills, leadership, team cohesion, emotional literacy and diversity and inclusion on individual and team performance.

He is a Senior Fellow at the Applied Centre for Emotional Literacy, Learning and Research with the well-known academic Dr. Richard Majors.