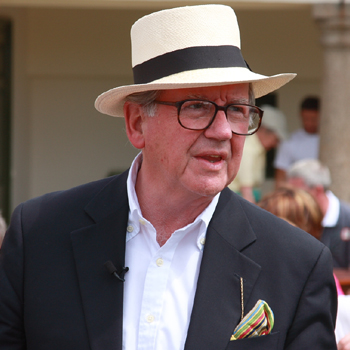 John Bly is an antique dealer specialising in old furniture, who is well known to viewers of The Antiques Roadshow.

The Bly family have been dealers in Tring since the early 19th Century. An ancient letterhead proclaimed 'JOHN BLY - antiques dealers since the reign of William IV'. It was the grandfather of the present John Bly who first showed a serious love and appreciation of old furniture and established his own business in the centre of Tring in 1891. The present John Bly worked for four years at Sotheby's before joining the family firm.

In 1991, the firm's 100th year, John Bly opened showrooms in Bury Street, St. James's, London. The business is still operated from Tring with showrooms and extensive workshops. John Bly provides the same services that his grandfather established: fine antiques bought and sold, full valuations, and cabinet making and restoration of the highest order.

He is a regular contributor to The Antiques Roadshow and The Great Antiques Hunt and has presented his own series for ITV called Heirloom.

John has written a number of books including Discovering English Furniture, Discovering Hallmarks on English Silver and Miller's Silver & Sheffield Plate Marks. He was editor of and contributor to Is It Genuine? republished as Antiques: A Guide for the Collector and he was chief consultant to the editor to the Antique Directory of Furniture and contributing editor to Readers' Digest Treasures in the Home.

John Bly's lectures are understandably popular and they have taken him around Britain, North America and Europe. Sample topics are:

INVESTMENT IN ANTIQUES - John has developed as talk on Antiques as an Investment Asset. The speech covers the benefits and pitfalls of such an investment plan with illustrations of winners and losers and how to profit from one and avoid the other.

Now the senior member of a family antiques dealership with over 100 years trading experience John Bly is well equipped to pass on the knowledge acquired in three generations of trading.

He is a Fellow of the Royal Society of Arts and a Liveryman of the Worshipful Company of Goldsmiths.
"John charmed our guests with his humourous delivery of well-chosen anecdotes and then amazed them with his rapid-fire sketches of antique styles through the eras. An enthusiastic and charismatic speaker."   Oxford University Society - London Branch
Read More