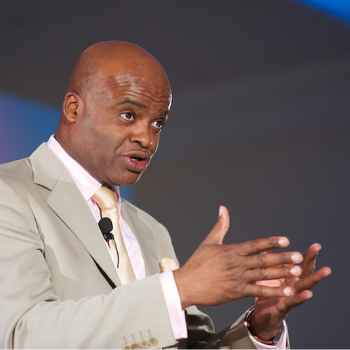 Kriss is famous for his achievements in athletics where his greatest individual triumph was his Gold Medal in the 1990 European Championships when he also beat David Hemery's 22 year old British record.

He began his international athletic career in 1983 as a member of the 4x400 metre relay squad and will probably always be remembered for helping Britain clinch the Gold and beat the Americans in the World Championships 4x400 metre relay in Tokyo.

As a 3 x Olympic medallist, World, European and Commonwealth Champion Kriss was awarded the MBE by Her Majesty The Queen in her Birthday Honours List in recognition of his services to the country through athletics.

His break in television and entertainment came when he presented The Big Breakfast. This was followed with a full time job as co-presenter with BBC'S 'Record Breakers'. He has presented various children's programmes and regularly appears on game shows and chat shows where the brief is "fun and entertainment".

Kriss is currently the CEO of The Akabusi Company, a corporate communications and training company where his marvellous personality and reputation as a fantastic public speaker has made him a very popular and attractive advocate.

"He was fantastic - thank you!"