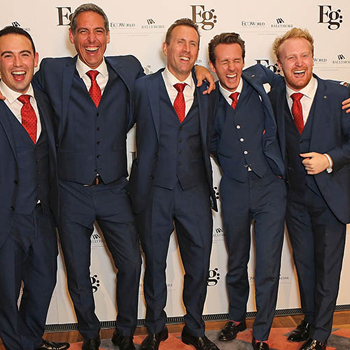 The London Essentials is a collective of five nomadic musicians, who first got together in 2010, drawn to each other by their calling to entertain the masses with a quality blend of talent and originality. Founded by bandleader Ben Matthews, the group was born from his busking experience in the exoticsurounding that are synonymous with Nice and the French riviera.  Showmanship and spontaneity,  along with their professional musicianship, was the driving concept behind the band.
The London Essentials perform completely acoustically, requiring no amplification or stage, preferring instead to mingle with the audience - serenading, flattering, surprising, and seducing their listeners as they go.
The group's audacious repertoire ranges from Rat Pack swing through 60s rock n' roll and 80s classics to current chart music, giving hits from across the decades the distinctive Essentials treatment - unique instrumentation, riotous performances and telepathic five-part vocal harmonies.
Word of mouth has been crucial to the London Essentials' progress, the zeitgeist spreading fast thanks to the pedigree of gigs and clients accrued even in the band's first year. Performing for the Bransons on Necker Island, K.P. Singh on a floating palace in Udaipur, the British Royals in London and some of Europe's biggest companies throughout the continent has taken the band to increasing success
Read More