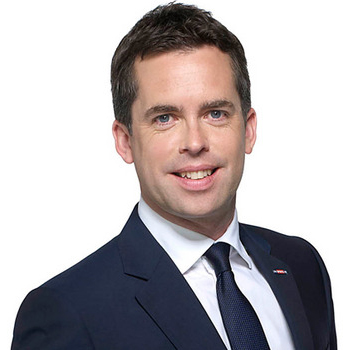 David is a popular, well-established sports presenter, best known on Sky Sports.
Originally David trained as a newspaper reporter but he seized the opportunity to join Sky Sports News when it launched in 1998. He progressed quickly from scriptwriter to reporter and then made the move to pitch-side reporter in Premier League games, before starring in front of the camera. David became the longstanding face of the Sky Sports News afternoon spot for four years, working alongside co-host Georgie Thompson.
As well as Sky Sports News, David has had a successful career presenting many renowned sporting events including the 2006 and 2010 football World Cups, Football and Premier League's coverage and England's World Cup qualifiers from Bulgaria and Montenegro. David was also privileged to be involved in the incredible coverage of the London 2012 Olympics.
David has also hosted three European U21 football championships, FA Cup games, Champions League matches; clocking up around 500 live outside broadcast football matches overall. He hosts and co-produces 'The Footballers Football Show' and will also be fronting an exciting new programme, 'Saturday Night Football with Jamie Redknapp'.
David is a popular host for corporate events and has presented two consecutive Professional Footballers Association award ceremonies. Most recently David has hosted on-pitch for many England cricket international matches for the England and Wales Cricket Board, as well as working with the Surrey County Cricket Club hosting their end of season awards dinner.
David is an enthusiastic sportsman, with interests including football, cricket, golf and athletics.

Sports presenter, best known on Sky Sports for his football coverage. He has also hosted international cricket matches and covered the London 2012 Olympics David is a popular host for corporate events and awards ceremonies.