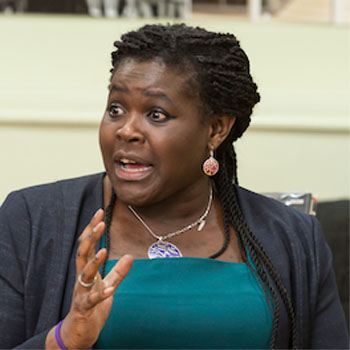 Dr Maggie Aderin-Pocock is a scientist and broadcaster who people refer to as the BBC’s ‘face of space’. She is presenter of the astronomical institution "The Sky at Night", has fronted a number of space documentaries, and regularly appears on science and non-science programmes.

From a modest background and diagnosed with dyslexia, Maggie overcame the naysayers to study at Imperial College where she obtained her degree in Physics plus a PhD in Mechanical Engineering. After her studies, she toured the UK speaking to inner-city schools about what scientists do and why and how to be one with the aim of inspiring the next generation of physicists.

Since then she has spent her career making novel, bespoke instrumentation in both the industrial and academic environments. These instruments have ranged from hand-held land mine detectors to an optical subsystem for the James Webb Space Telescope (the replacement for the Hubble space telescope). She has worked for the MoD on missile warning systems, and for aerospace giant EADS on a range of projects to monitor the earth’s atmosphere.

Maggie is a research fellow and an Honorary Research Associate at University College London, and continues her work to engage the public with science. She augments her ‘Tours of the Universe’ presentations to young and old with regular TV and radio appearance.

As well as fronting The Sky at Night, Maggie has appeared in programmes including Stargazing Live, The Science of Doctor Who, and In Orbit: How Satellites Rule Our World. An engaging and passionate speaker, Maggie’s enthusiasm for science and learning is infectious. As well as looking at the wonders of space and what it can teach us, she also tackles science education and public understanding, and women in science and engineering.

Maggie is an inspirational speaker for corporate events.