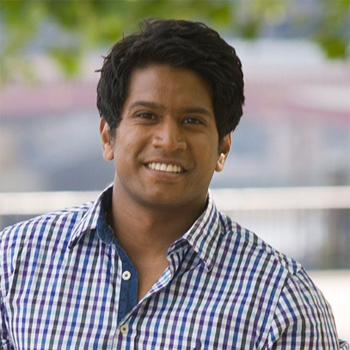 Gavin Ramjaun is a lead presenter on Channel 5 news. He also appears on various ITV programmes, as well as presenting and producing documentary strands for Yahoo! A bright, energetic and engaging personality, Gavin brings stories to his audience in a unique and memorable way.

Gavin was a presenter on the BBC News Channel and correspondent for BBC Breakfast . His big on-air breaks came presenting Newsround and Sportsround on CBBC.

'Learning the ropes at the BBC is a fantastic start to any budding journalist's career. I've learnt from some great correspondents in the field, and have now developed and fine tuned all my skills to the creative engines at ITV, working alongside some of the best talent the industry has to offer'.

Also whilst at the BBC, Gavin reported on Radio Five Live, the Today programme on Radio 4, and the renowned BBC World Service. He later became one of the youngest presenters in BBC World TV history at the age of 26.

Gavin's specialisms range across news, features, lifestyle, human interest and sport. He's covered an array of content,  from in-depth cyber-bullying reports to Heathrow weather chaos, to being live at the scenes of serious crimes. On the odd occasion, he has been known to hang out and play football with mega-stars like Justin Bieber, or even play golf with Samuel L.Jackson! He also fronted national and international sports coverage for the BBC News Channel and BBC World, and reported on the 2010 Winter Olympics.

'I feel very privileged to have met the people my line of work has brought me into. It's very easy to take for granted the access that we are given at times. Always remembering we have stories to report, I do sometimes pinch myself at the experiences'

Gavin was born and bred in Worcestershire, and is a keen footballer in his spare time (an Arsenal supporter!). He played semi-professionally as a teenager and in university, and dabbles in the odd game when he can. He also loves to read crime and escapism literature, attempting to learn languages, and travelling.

His family are from Ile Maurice, with relatives also across Europe.

"Gavin was great. It was a difficult venue and a very tight get in, which meant we had no time for rehearsals. He really got stuck in and worked with the team to make it happen.  We were very pleased."  DRP Group for the Reckitt Benckiser Group Awards

Gavin is a lead presenter on Channel 5 news and has also worked as a presenter/reporter on various ITV programmes. He also produces and presents documentary strands on Yahoo!