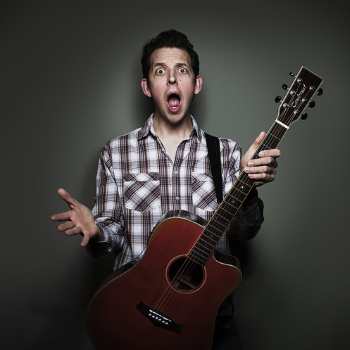 Jonny Awsum is an award-winning comedian who has charmed audiences all around the world with his high energy performance style and unique brand of musical comedy. A comedic whirlwind, Jonny has a special feel-good brand of comedy. He is the gag slinging guitar hero - audience members don’t just leave entertained, they leave as fans.

After building his reputation on the UK comedy circuit, where he is a regular headliner and closing act, Jonny shot to national fame on Britain’s Got Talent. His TV performances won standing ovations and unanimous praise from the judges and went viral on the internet, racking up over 50 million views on YouTube.

Following BGT, Jonny enjoyed a whirlwind 18 months including a sell-out five-star reviewed run at the Edinburgh Fringe, a starring role in his first pantomime, and tour support to both Lost Voice Guy and Tape Face on their hit UK theatre tours.

After being inundated with requests to perform his own tour, Jonny created the show ‘Jonny Awsum is Coming to Town’ and played to full houses in many of the UK’s towns before COVID-19 put a temporary halt on live performances.

Undeterred, Jonny set about writing a virtual show specifically for youngsters. The show proved a hit, winning Best Kids’ Show at the 2021 Leicester Comedy Festival and is now being booked for live performances by family-friendly festivals and events all across the country.

Jonny regularly pops up on TV and radio. He has featured on BBC Breakfast, GMTV, BBC Radio 2, BBC Radio 5 Live and Absolute Radio and has appeared in TV commercials for brands including Cravendale, EDF, The Post Office, VW and Samsung.

Jonny’s comic talents have also been sought by private clients with corporate work including hosting for Harley Davidson, Polydor Records and Freixenet. With experience of warming audiences up at some of the biggest shows going, including Big Brother, Jonny has developed a winning style.

Jonny performs at many Weddings and private events throughout the year; he's just as comfortable in an intimate setting, and no one leaves disappointed, especially after one of his specially crafted songs, uniquely penned for the special day.