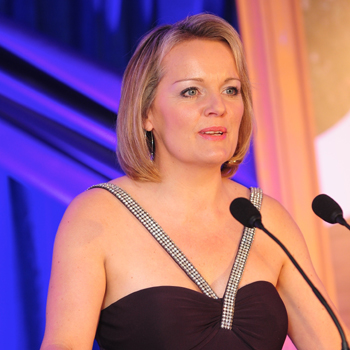 Mary is regular presenter on regional BBC programmes having previously been the main sports presenter on BBC Ten o'clock News and weekend bulletins on BBC 1. She also presented sport on Breakfast and was a regularly on BBC World.
She has also hosted The Heaven and Earth Show on BBC1 on Sunday mornings. This was an hour long magazine show broadcast live from Manchester.
Mary has combined her on screen work with radio having appeared on BBC Radio 2, 4 & 5.
She was the voice of “The Challenge golf programme for Sky, Channel Five and Eurosport and has covered major sporting events for News and Sport, including the Olympics, Commonwealth Games, Cricket World Cup, Australian Open, and Wimbledon. She has also written travel articles for The Guardian.
In the corporate world she provides media and presentation coaching, and is a popular choice to chair conferences and host awards ceremonies.
If you are looking for a professional conference host, someone to link an event or a confident video presenter, then Mary comes highly recommended.
"Mary Rhodes was an excellent host for the awards, warm and engaging."  Mary hosted RICS West Midlands Awards - May 2012
"Just wanted to drop you a note to tell you what a great job Mary Rhodes did yesterday... Her professionalism, attention to detail and thoroughly cheerful personality was fabulous and extremely refreshing. She really did make a very valuable contribution to the day and certainly gave the event a big lift...once again, thank you to you for recommending someone in a very short space of time who was such a perfect fit for the event."  Mary hosted an event for Orange - February 2008

"Thank you for doing such a tremendous job at our awards ceremony. It was very good to have the evening anchored so professionally." Mary hosted the East Midlands Tourism Awards ceremony - September 2006

Mary was the main sports presenter on BBC Ten O'clock News and weekend bulletins on BBC 1. She now provides media training, is a regular host for conference and seminars as well as being a regular fixture on the BBC in the midlands.