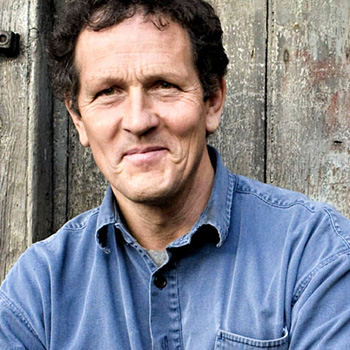 "One of the true pleasures of gardening is the range and variety of plants that we can grow. My favourite job in the garden is planting."

Monty's personal story is one of triumph over adversity including overcoming bankruptcy and depression to the glittering career he has now.  He's incredibly engaging, charismatic and passionate about how we can all make the world a better place through reconnecting with each other.

Monty Don became the nation's most high-profile gardener when he took on the role of  lead presenter of BBC's Gardener's World.  Entirely self-taught, he has been gardening since he was a child  -  but it was not until his late thirties that his great passion became his livelihood.  His first career ended disastrously; he and his wife Sarah set up a jewellery business together and during the 80s they prospered.  They had shops and offices in Knightsbridge and counted singers and film stars among their clients.  But with the slump they lost everything - the business, their jobs and their home.

Monty suffered years of depression that left him barely able to function.  It was by chance that he was offered some stints presenting gardening slots on television.  He never looked back.

He has a two-acre garden in Herefordshire, where he lives with his wife Sarah and their three children. He particularly loves his spring garden which is filled with flowers from February to late May. When everything else is grey and miserable it is full of hope. Monty's favourite garden is his own because he loves gardening and doing it is as important to him as enjoying other people's work.

He has published many books including Growing out of Trouble which was accompanied by a series of the same name for BBC 2, and followed his attempts to rehabilitate a group of persistent offenders through work on a smallholding.

Monty has presented, opened and lectured at events all over the UK, appearing at Hay Festival as speaker and interviewer seven times. Recent appearances reflect Monty's versatility and engagement as a guest speaker; he has given a tour of the beautiful Salutation Garden in Sandwich, discussed policy at Probation Service conferences in South Wales and West Mercia, and delivered speeches at the Holker Festival and the Kent Garden Show.

In 2008 he suffered a mild stroke which prompted him to step down from Gardener's World for gardening leave while he recovered fully.

"Your input was engaging, compelling and very honest and was a great start to what I believe was a very successful conference."  ADSW on Monty Don - May 2009
Read More