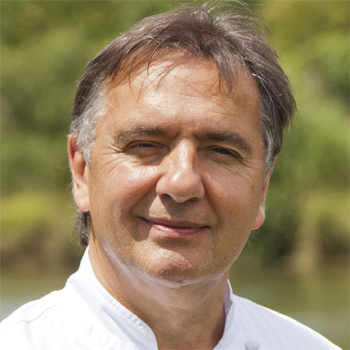 Born in Besançon, France in 1949, Raymond Blanc is acknowledged as one of the finest chefs in the world. His exquisite cooking has received tributes from every national and international guide to culinary excellence. He arrived in England in 1972 to work as a waiter at the Rose Revived Restaurant near Witney. When the chef became ill, he took over and two years later, the restaurant gained entry into the Michelin Guide. At the age of 28, Raymond Blanc opened his first restaurant, 'Les Quat' Saisons' in Summertown, Oxford.
After just one year, the restaurant was named Egon Ronay Restaurant of the Year and a host of other accolades including Michelin Stars and Pestle & Mortar awards followed.
It was in 1984, however, that he fulfilled a personal vision, creating an hotel and restaurant in harmony when he opened   in Great Milton, Oxford. Le Manoir is the only country house hotel in the UK which has achieved two Michelin Stars for a total of 16 years and sustained the Relais and Chateaux Purple Shield. "His house is as beautiful as a tale of Lewis Carroll" commented Gilles Pudlowski.
In 1991, RB established L' Ecole de Cuisine at Le Manoir, welcoming both enthusiastic amateurs and the professional cook to the kitchen. Creating the opportunity for them to develop their skills whilst learning some of the secrets of his kitchen, L'Ecole is very much part of the excellence of Le Manoir.
In 1996, the first Le Petit Blanc brasserie opened in Oxford. Raymond's aim was to be the best within the brasserie scene in England - serving good quality, freshly prepared food at a price that was accessible and represented excellent value. Subsequently, a second Le Petit Blanc opened in Cheltenham in February 1998, and a third opened in Birmingham September 1999. The fourth brasserie opened in Manchester in November 2000. They are the only brasseries in the United Kingdom that have achieved the Michelin Bib Gourmand.
He has written a selection of best sellers including 'Cooking For Friends', 'A Blanc Christmas', the Sunday Times bestseller 'Recipes from Le Manoir aux Quat' Saisons', 'Blanc Vite', 'A taste of My Life' and 'Kitchen Secrets'.
In 1998 Raymond Blanc worked alongside top interior designer Emily Todhunter completing a major development project at Le Manoir. Together, their visions and creativity prepared the 15th Century Manor House Hotel for the demands and expectations of the new Millennium.
It was a huge honour and music to Raymond's ears when Le Manoir was voted the 'UK Restaurant the industry would most like to visit'. Fellow professionals recognised his outstanding contribution and commitment by voting him 'Most respected person in the industry' in a lifestyle survey conducted by specialist industry publication Caterer & Hotelkeeper.
Read More