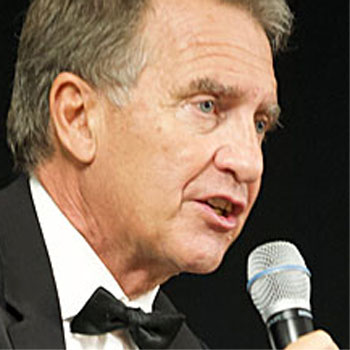 Garry Richardson has worked for the BBC for 45 years and during that time he’s interviewed and worked with some of the world’s most famous people.

Garry can be heard most morning on BBC Radio 4’s prestigious “Today” programme; maybe Britain’s most influential breakfast programme. He’s been appearing on the programme for 38 years and is the longest serving member of the team. He can be heard om most mornings broadcasting from the BBC studios and rubbing shoulders with the countries decision makers.

It’s the range of stories that has made Garry an incredibly popular speaker for over 30 years. His impromptu BBC TV interview with President Bill Clinton after a meeting with White House secret service agents is a highly amusing story. A great one for an after dinner set!

In another presidential interview Garry interviewed Nelson Mandela who gave him a friendly punch during the course of their chat.

After 45 years at the BBC Garry takes you behind the scenes with a fund of hilarious stories from his broadcasting life. He is also able to deliver a motivational speech incorporating video and slides if required.

It’s at corporate business dinners and as an awards host where Garry has proved to be an outstanding success. The range of clients Garry has spoken to come from just about every profession.

“ We have received only positive feedback from the delegates, all bar none enjoyed your excellent speech”

“ He immediately got the crowd laughing and kept us well entertained with his anecdotes and observations. A truly accomplished speaker, it was a performance myself and others have rarely seen bettered “

“Your contribution set the atmosphere for the event perfectly”

“Everyone was very impressed and thoroughly enjoyed your speech”

"Please pass on our effusive thanks to Garry Richardson.
His contribution as the After Dinner speaker at the DAF Trucks conference dinner last week was outstanding and our client was more than pleased with his very entertaining and very, very funny stories."

"The feedback has been fantastic very funny and enlightening"

" I have received nothing but praise about your speech"

"Fantastic hope we can work together again soon"

"Garry was the consummate professional"

Garry presents the sport on the Radio 4 Today programme and is the longest serving member, having appeared on the programme for 38 years! A very popular after dinner speaker and host.